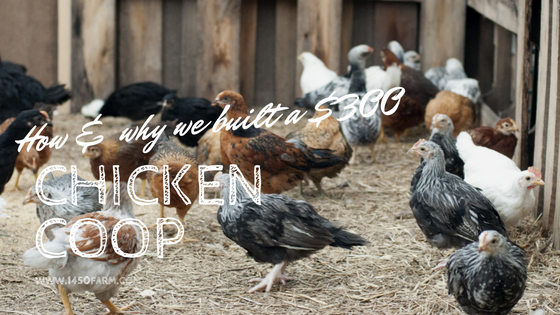 It finally feels like we’re turning the corner into Spring! Now that the weather is nice, everything seems to be moving at the speed of light. We have so many tasks on our farm to-do list that it doesn’t feel like we’re ever going to get them all done. Lately we’ve had to just focus on the things that have to get done now and save the other tasks for another day. This past week, our highest priority has been getting the 75ish chicks out of our garage and into their new coop. Slight problem though…there was no new coop and we were at capacity in two of our other coops, one coop has been converted to the dog quarters, and the other coop is still in a state of disrepair after the stray dogs destroyed it. So, as we tend to do here, we improvised a solution at the last minute and cobbled together a temporary-permanent coop.

As time was getting closer to move the chicks from the brooder, it became clear that we weren’t going to get a useable running gear or hay wagon at a reasonable price for our intended use of creating an egg mobile, so we had to scrap that idea and come up with a new plan on the fly. We knew we needed a pretty sizeable coop, but we didn’t want to spend a lot of money on it since we have a lot of other infrastructure costs coming up on the farm. After contemplating several options for framing and roofing, we decided that the most cost-effective solution would be to just stand some pallets on edge and screw them together to form walls and then bend some 16’ cattle panels over the top of them to create an arch that could then have a heavy duty carport-style tarp attached to them. That was the basic plan, and if I’m being honest, most of my plans include about that little detail in them when I start. With no further ciphering, Shannon and I hauled a bunch of pallets from our never-ended pallet pile over to the pasture and started setting them up and screwing them together. We ended up making the structure about 20’ long by about 10’ wide, leaving a 2’ gap in the middle of each end to accommodate a door. After getting the walls set up we needed to figure out how to attach the cattle panels. In the past I’ve just used fencing staples for this, but that didn’t seem adequate for the magnitude of this structure. What we ended up doing was screwing 2x4s to the outside of the walls about 2’ off the ground and running the length of the coop and extended past the end about 2’ to create an overhang on each end. To those 2x4s we screwed 2x6s, lining up the bottoms of each board to create a pocket on top of the 2×4 that we could slide the cattle panels into. After we bent the panels into the slots we just ran some screws through the boards to hold the panels in place. We lined the outside of the walls with old steel roofing under the 2x4s to make the lower half of the coop predator proof (although it’s inside electric fencing and next to the puppies, so we’re hoping predation will not be a major issue).

After we got the panels attached to the walls it was time to start doing a little framing on the ends so we could attach some siding. We were supposed to be starting the build of our detached garage, so my dad came out to help get that going. Unfortunately, I had to let him know that I needed to work on the coop instead. Well, as my dad always does, he jumped right in and started suggesting major improvements to make whatever I’m working on better. My dad is just about the handiest person you could ever meet, but he’s also a bit of a perfectionist. I’m not either of those things, so I can’t imagine how much it pains him to see the messes I start out here. Alas, he enthusiastically started helping me and we were able to get the end walls framed and sided, made a door, attached the tarp roof and put a window replete with shutters on the end wall opposite the door, in 2 short days. Every time I would remind dad that this was just a temporary coop, he reminded me that temporary often turns into permanent. And he’s right. I imagine we will be using this coop until the pallets rot from the ground up. 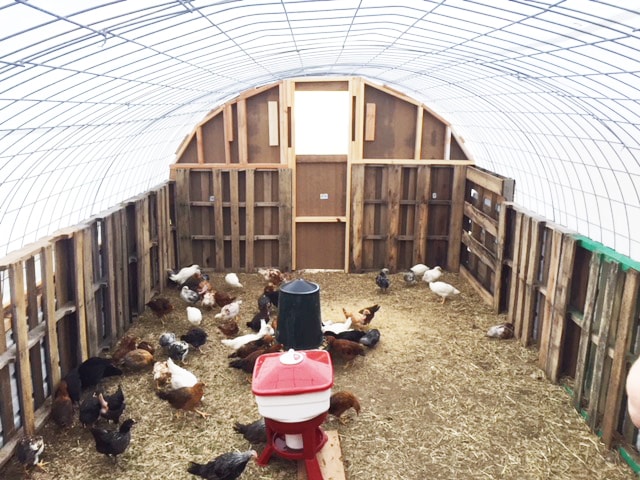 Interior view of the newest coop! 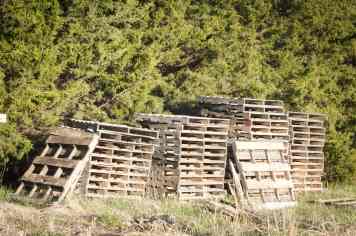 Our never-ending pile of useful pallets! 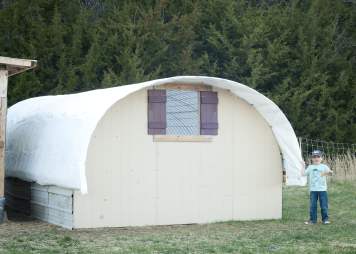 The window side of the coop 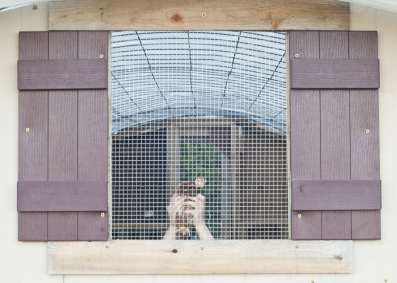 Ansel is holding up a red hen for you to see! 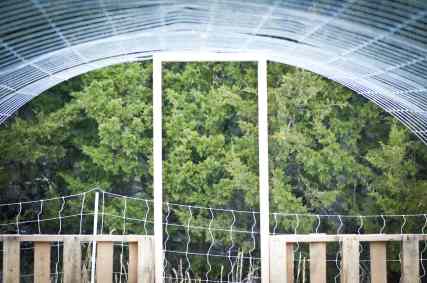 Before it was complete. 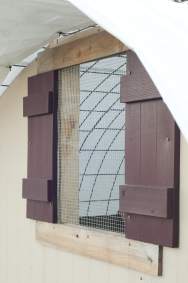 The window and overhang.

We have an old set of cabinets from my grandpa’s workshop that we are going to convert to nest boxes and hang in the coop and we also will be adding a multi-tiered roost bar situation ASAP. We plan on keeping the chicks inside this coop for a few weeks until they’re big enough to not be able to just slip right through the electric poultry netting. Between now and then, I should probably also make a pop-door in the end of the coop, so the chickens have a small door to access the pasture while not allowing the pups to go inside the coop to forage on chicken feed and poop. Once the chicks are big enough, we will be letting them range in the pasture with some electric net fencing between them and the puppies. Hopefully the puppies’ presence will deter hawks and the proximity will allow the puppies and chickens to get used to being around each other. Once we can trust the puppies with the chickens, we will remove the electric fence barrier and allow the chickens to have free range of roughly 4 acres of pasture with the dogs present as their (hopefully) fierce protectors.

With the coop finished enough, we gathered up some old Rubbermaid containers we’ve used to haul roosters to the processor and set to work emptying our garage brooder of somewhere in the neighborhood of 75 chicks. Ansel and Arlo helped us release the chicks in the new coop and made sure they became acquainted with their new feeder and waterer, which by the way, are awesome. Our new feeder holds an entire 50# bag of feed and the new waterer holds like 8 or 10 gallons of water. We got both of them from Premier One Supplies and so far couldn’t be happier. On a side note, our surveyors are supposed to finally be out today so we can start putting up permanent fencing for the dogs, chickens, and future sheep and pigs. Sometimes it feels like we’re going 90 mph and not getting anywhere, but it’s nice to be able to check an important project off the to-do list, even if 3 more projects take its place. It’s also nice to have a garage that doesn’t smell like chickens. 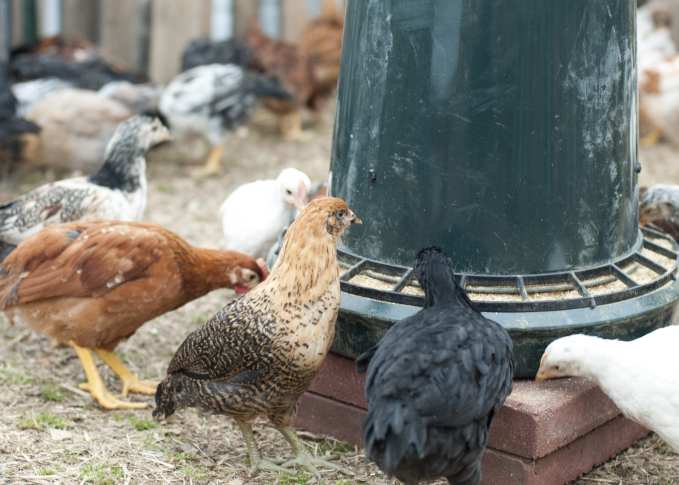 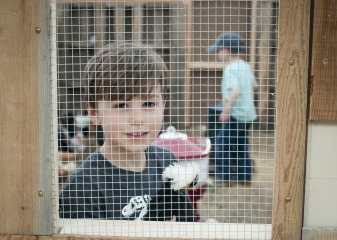 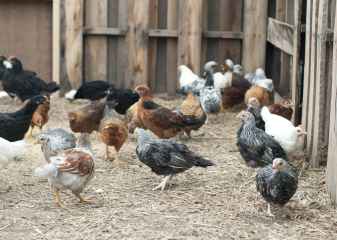 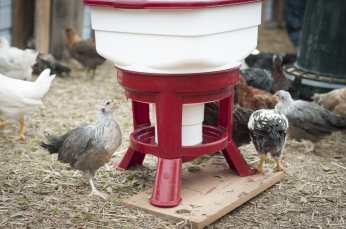 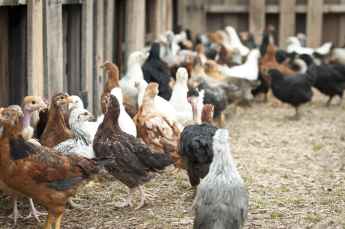 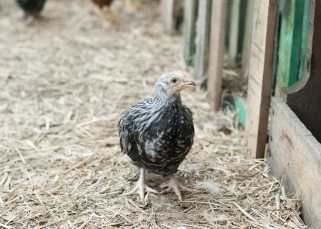