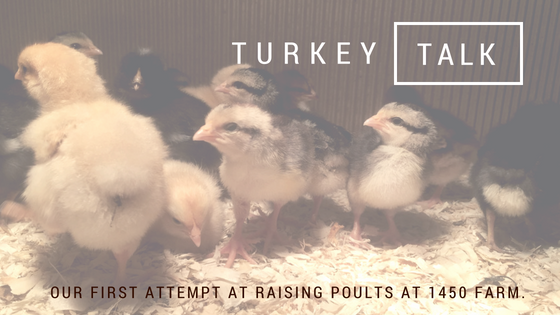 Coming into this farming season, we decided to ramp up our enterprises a bit to trial run some ventures we thought we’d like to add to the farm. The no-brainer first addition was the pastured broilers. Since we have raised egg layers and culled our heritage breed roosters, we felt like it wouldn’t be a stretch to try our hand at meat production. We need to modify some of our infrastructure and dial in our processing ages (depending on what strain of Cornish cross we end up using), but we’re pretty confident in managing a pastured poultry operation moving forward. I have a call into our processor to see about getting a batch of Cornish from them at the end of July, so stay tuned if you’re going to be in the market for some pastured, organic-fed chicken around late September/early October.

The next logical enterprise that would integrate well with our current enterprises is pastured turkey. Well, as I tend to do, I decided that I wanted to try my hand with heritage turkeys first to see how we liked their meat and decide if we thought it was worth raising them over a traditional broad-breasted white turkey (the commercial standard). I saw a lot of people recommend Porter’s Rare Heritage Turkeys (porterturkeys.com), so I decided to order a breeder’s choice assortment of 15 turkeys way back in November. I was under the impression that the turkeys would be delivered mid-May, but we didn’t end up getting them until June 7th. It actually worked out really well that they came later because I would have been sick when they were supposed to come. Also, just to be clear, Porter’s states on their website that they will try to meet your earliest requested shipping date, but shipments can be delayed because of issues with hatches and other things that are really out of their control. I just didn’t want to give the impression that we had any issues with the hatchery.

The boys are excited to see the just-arrived poults!

They are seriously cute turkey babies.

Well, when we opened the box, after retrieving it from the post office bright and early, we saw 16 little googly-eyed poults staring up at us chirping. At first glance they really just looked like a box of baby chicks, but upon further examination we noticed their bigger eyes and little bump above their beaks where their snood will be. We dipped their beaks in their waterer and set them in front of their feeder and sat back to observe for a bit before heading off to work. We quickly noticed how much more curious turkey poults are than chicks. When we stick our hands down into the chick brooder they scatter and chirp like crazy, but when we stuck our hands into the turkey brooder they would come running over to us to see what was going on, sometimes pecking at us or jumping at our hands or phones (I mean, how can you not take pictures of 2 day old turkeys). They are full of personality.

After the first two days in the brooder we were feeling pretty good about how things were going. We had heard and read plenty of horror stories about how difficult poults can be to keep alive the first few weeks of their lives. People say they’re always coming up with new ways to die. Well, if I’m being honest, I usually cast aside commentary like that and assume that I can manage things better. This time I was wrong. On day three we started noticing a poult that didn’t look like it was doing well. We intermittently dipped its beak in the water and tried to get it to eat, but after a while, it just dropped dead. We lost a couple more throughout the day in the same manner and we have no idea why. We did have the garage door open most of the day, so perhaps it was too humid, or perhaps they were just weak birds, or they never figured out where the food was, or some combination of several factors. In total we have lost five of our 16 poults, but the remaining 11 appear to be doing well. They are actively running around and I know all of our remaining poults are eating. We had already added some brown sugar and apple cider vinegar to their water when they first arrived to help give them a boost and mixed a bit of feed with some plain yogurt to give them some probiotics. After we started losing some birds, we added an electrolyte mixture and then a vitamin supplement. So, hopefully all of these steps will keep the remaining poults alive long enough to get out to pasture.

We can tell we already really like the turkeys. My main concern is that since we got heritage birds, I’m worried that we’re going to have a hard time keeping them where we want them. I’ve read they tend to like to fly up in trees to roost and well, we have around 10 acres of trees for them to choose from. Clipping their wings is an option, but I want to see how they react when we get them out on pasture before we decide to do that. After getting these turkeys I immediately wished we would have ordered some broad-breasted white turkeys so we could compare how we liked raising them and eating them so we could ramp up production next season knowing our preference. Our processor has some chick days for Cornish cross and hybrid egg-layers and also sells broad-breasted white turkeys on their farm in June and July, so I’m waiting to hear back whether they still have any available this season. If we can get some, we’ll probably add another 10 to our rafter of turkeys. My other concern is that my heritage birds won’t be ready to process before this Thanksgiving, so I’d like to at least have some turkey to try this year.

Ultimately, I think we will end up keeping some heritage birds to breed a small number of birds each year and then we’ll round out our turkey production with broad-breasted white turkeys. These birds will all be out on pasture eating bugs, worms, and grass, so they will be full of vitamins and minerals. I should also mention that, as with all of our poultry, we’re feeding our turkeys organic feed. We talked to our feed mill and they were able to custom blend a 28% protein organic turkey starter for us. The significantly higher protein requirement makes the turkey feed much more expensive than our chicken feed, so we will be tracking our costs closely to determine pricing when we are ready to bring our product to the public. I can guarantee that our turkeys will not be competitive with the birds you see in the supermarket, but I can also guarantee that we will produce the highest quality turkey in the area. When I see turkey (or chicken for that matter) at the store for $1.29/pound it makes me sad. Cheap food comes at a great cost. It costs us in our own health, it costs the animals in horrendous living conditions, it costs the contracted farmers who can’t make a living wage, and on down the line. We can’t wait to partner with conscientious, local consumers and to join in changing our food system for the better. 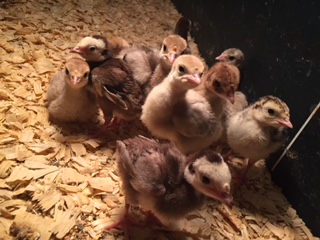 They are so curious!

The brooder in service again, this time for poults!

← When the Farmer is the One Sick
Farming is Hard →