It’s been a little over two months since we added our first batch of turkeys to the farm. As you’ll recall, we lost some of our heritage birds in the brooder phase, but added a handful of Broad Breasted White turkeys to the mix for a grand total of 15 turkeys. As of today, we still have all 15 of those turkeys (it’s hard to knock on wood and type at the same time)! We moved the turkeys out to one of our pastures near the garden to let them scratch around and deposit some manure in an area that we would eventually like to expand our garden into. We put up a section of Premier One electric poultry net fencing around the hoop coop and kept them shut in the coop for a little over a week to get them acclimated to their new environment. Since the stray dogs destroyed part of the hoop coop last winter we added a new tarp to the top and reinforced some of the wiring in the lower section of the coop. Since turkeys are pretty hardy we used a tarp that would stretch from end to end, but wouldn’t go all the way to the ground, so they could get sunshine and air flow when they’re inside the coop, but still have protection from the rain. So far this setup has worked really well for the small number of birds we have.

Shannon lets the turkeys out every morning and makes sure they have food and water. They have developed such wonderful personalities and follow us around wherever we go inside their fence. We have both been surprised by how much we are enjoying the turkeys. In the evening we sometimes have to “herd” a few of the stragglers back into their coop for the evening, but for the most part they are getting the hang of going back into their home to roost. The heritage birds occasionally fly over their fence, but so far they haven’t strayed into the woods. Typically we find them pacing the fence line trying to figure out how to get back over to their friends. It’s adorable to watch the little Toms puff up their feathers and strut around when they all get worked up. We plan to eventually build a mobile roost with a roof to move around the pasture once we have it externally fenced, but for now we’re content to move the hoop coop around in the electric net. 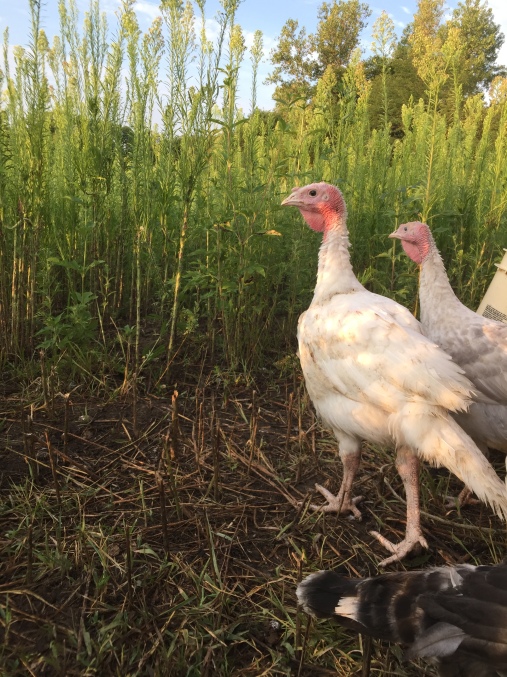 Speaking of the future, what’s the plan for turkeys on our farm long-term? Well, 10 of these birds will be going to the processor on November 1stand we will keep 5 of the heritage birds to either grow out a little longer or keep to breed. Since the Broad Breasted turkeys can’t mate naturally, we won’t keep any of them. Feeling pretty comfortable with the turkeys now, we will probably look to incubate some heritage turkey eggs and order around 50 Broad Breasted Whites to finish out for Thanksgiving 2019. We will be taking pre-order deposits for those birds next summer and will keep you posted on how all of that will work. All of our turkeys will be (and currently are) fed organic feed and allowed to roam our pastures during the day. As I’ve mentioned before, both of these elements are very important to us and guide how we’ve chosen to farm. If you’ve been following the news lately you’ve probably seen the reports of glyphosate in breakfast cereals. There is much debate about how much exposure is safe for people, but given the opportunity to have traces of it in my children’s food or not having any in it, I’ll choose the latter every time. If things go well with our 2019 batch, we will probably increase our numbers again in 2020 and hopefully get to the point of doing over 100 a year. Turkey is the centerpiece of most American Thanksgiving tables and we look forward to producing an organically fed, local, pastured bird for our community.